New ways to watch EAT ME! 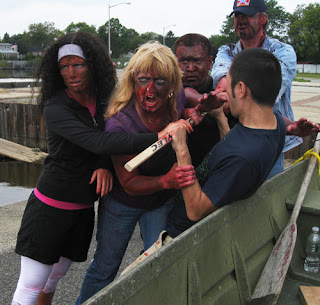 Hello to our fans old and new!

We're very happy to report that Eat Me! is now available on EpixHD. Watch it right now, right here!


With the addition of EpixHD, there are now three ways to watch!


And you can watch us for free at SnagFilms.com!


Thanks for watching! If you loved the movie, please rate and review us too!

"Eat Me!" reviewed in the Zombie Movie Encyclopedia!

A few years ago we were contacted by Professor Peter Engle and his staff who were sourcing all the recent zombie movies that have been produced to include in the 2nd Edition of the The Zombie Movie Encyclopedia: 2000-2010.

We were finally able to get our hands on a copy, and found quite a nice review. Read on:

This small scale zombie apocalypse from Brooklyn captures the feel of New York City: there’s greater ethnic diversity than in most low-budget regional pics, use of something called a “bicycle” (which even a zombie rides for a short stretch!), people in the road who won’t get out of your way, and an entire cast of characters who only speak in Irony. There’s a Hassidic Jew zombie really just minding his own business, while an undead Jehovah’s Witness tries to pass a Watchtower off onto the protagonists. When a black out hits the Boroughs, the stoner members of basement band General Malacarne find that the streets are largely empty and everyone has become cannibal zombies.

They pursue a series of half-baked plans to make it out to a bay house on a nearby island, plans that aren’t helped by the fact that the characters are half-baked too most of the time. Writer and cast member Elizabeth Lee told New York Press, “It seemed like bring[ ing] zombies to the stoner genre was natural, since stoners are zombie-like. We find zombies really, really funny, and we find stoners really, really funny. It was a natural combination.”

The movie is an unambitious affair overall, but it’s kept periodically entertaining by some innovative use of situations along the way and by the characters’ constant sarcastic banter and vaguely aloof cynicism. The zombie outbreak is apparently due to a renegade satellite that’s hurdled back to Earth. The undead are drippy and covered in red goop. They smell blood, and are attracted to open wounds— this gets them especially agitated.

Otherwise, their behavior is unpredictable; some of them simply stand around with no discernible motives or impulses whatsoever. Improvised weapons against the zombies include skillets, brooms, pool cue, hockey stick, candlestick, and drum sticks. In one scene, a zombie trying to chase the characters in their Volkswagon presses up against the rear windshield and so winds up inadvertently pushing them a fair way down the road. The characters argue over whether the undead assailants are zombies or vampires, a point which guitarist Sam (Calloway) seems to settle. He points to a zombie they have strapped to a chair with packing tape and an electric cord, explaining, “See guys, these— these are zombies. They’re not picky. They don’t have taste.”

Elsewhere, when lead singer Miko (Hong) asks, “how are we going to kill them if they’re already dead?” Sam answers deliciously, “Uh ... have you ever seen any movie, ever? You aim for the head.” The undead may be unholy monsters, but they don’t stand a chance against hardened New York apathy.

Posted by Katie Carman at 1:17 PM No comments:


As a kid, director Katie Carman's storytelling and "wild imagination" used to get her into trouble. Through her love of filmmaking, however, she's harnessed those proclivities into a creative machine, with "Eat Me" being the most recent result. Inspired by the innovative zombie flicks of George Romero, "Eat Me!" intends to serve as another fresh take on the zombie-horror genre. The film is available now on the SnagFilms site (and below).

We can finally share the good news that EAT ME! has been picked up by SnagFilms for distribution!!! SnagFilms.com offers the broadest collection of great independent movies you can watch right now, on demand, on the web. They also have video-on-demand deals with Comcast, Verizon and more, as well as purchase options with Apple’s iTunes and others.


Posted by Katie Carman at 1:19 PM No comments:

Floyd, the bright orange vehicular star of "Eat Me!" in this Saturday's German-American Steuben Parade!

If you've seen "Eat Me!" you know how important Floyd the car was to the movie -- but he also holds a special place in the heart of the film's director, Katie Carman. First driven by Katie, and now her mother Sue, Floyd the 1973 Volkswagen Squareback has been in the Carman family for nearly 15 years. Lovingly restored and maintained as a daily driver, Floyd is also a member of the Long Island Volkswagen Club, which has been invited to participate in this year's Steuben Parade! Keep an eye out for them driving behind FDNY Ladder Truck 13 (lucky 13!)

Founded in 1957, the German-American Steuben Parade will run from 67th Street to 86th Street up Fifth Avenue, from 11:30AM - 2:00PM this Saturday, September 17th, and will be broadcast on different PBS affiliates, such as the New York based station WNET (Channel 13) which will broadcast live on Saturday, September 17, 2011 from 12 Noon to 2 PM with a repeat planned on WLIW the day after.

And if THAT doesn't get you out in your lederhosen, I just learned that this year's Grand Marshall is none other than our favorite Travel Channel star, Samantha Brown! (or maybe you're more into Ice Skating and Bearding? They've got stuff for you too!):

Posted by Katie Carman at 8:04 AM No comments:

"Eat Me!" now on Indieflix! 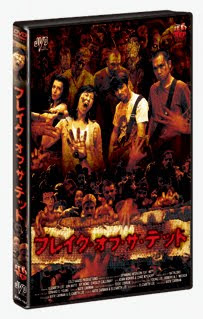 We finally got word of our release date for Japan: November 12th, 2010! It's already available pre-sale on a few Japanese retails sites such as Amazon.jp. We're still working on that North American release and hope to deliver on that promise soon! For now, enjoy the Japanese artwork where they've retitled the film "Break of the Dead": 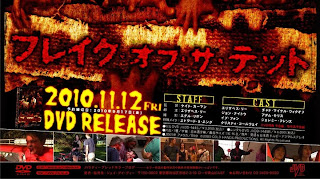 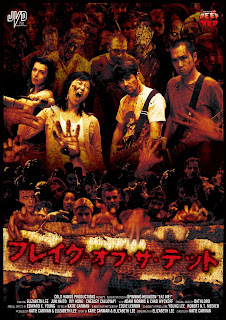 Posted by Katie Carman at 5:06 PM No comments:

EAT ME! A Zombie Comedy Feature from Cold Hands Productions on Facebook